The Hoof and Horn project is a 3D realization of a campaign I initially created for my Dungeons and Dragons fifth edition group. I chose to expand one of my adventures into Cryengine in order to take a personal concept through development and playtesting, whilst familiarizing myself with a new game engine. I wanted to create a level that would be at home in traditional top-down roleplaying game in keeping with the concept’s roots. The aim of the Hoof and Horn adventure was to assimilate new players into a currently on-going campaign, giving them a clear understanding of the game rules and the current story arc.

Based in the Forgotten Reams campaign setting, the players come upon a traveller being accosted by a seemingly unscrupulous man. After driving the man away the traveller reveals that he is the owner of a nearby Inn, known as the Hoof and Horn. The innkeeper is being extorted by a local bandit clan and offers the players a handsome reward for staying at the inn for the night to defend it from a likely attack. After what appears to be a relatively quiet evening of revelry and roleplay this seemingly conventional adventure takes a strange turn as the players woken in night by assailants. It’s revealed that the players have been deceived by the innkeeper, who is working with the bandits to capture the players for reasons unknown. After exploring the Inn, they uncover a hidden passageway in the cellar that leads to a small cave system. At the end of the cave they arrive at the bandit leader who reveals that he has was paid to capture the players, in order to prevent them from interfering with their employer’s plans, eventually leading them onto the main path of the overarching campaign. 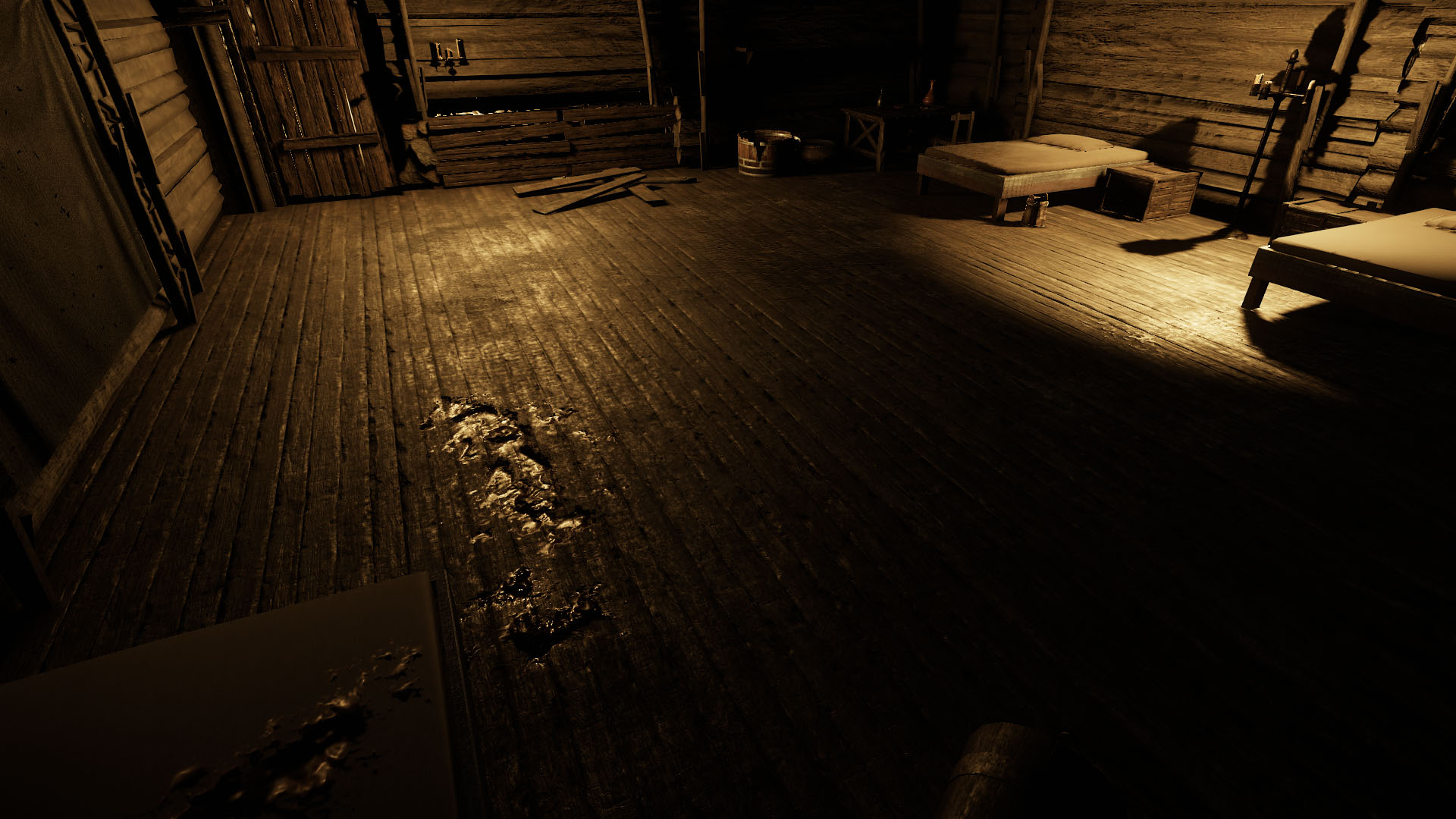 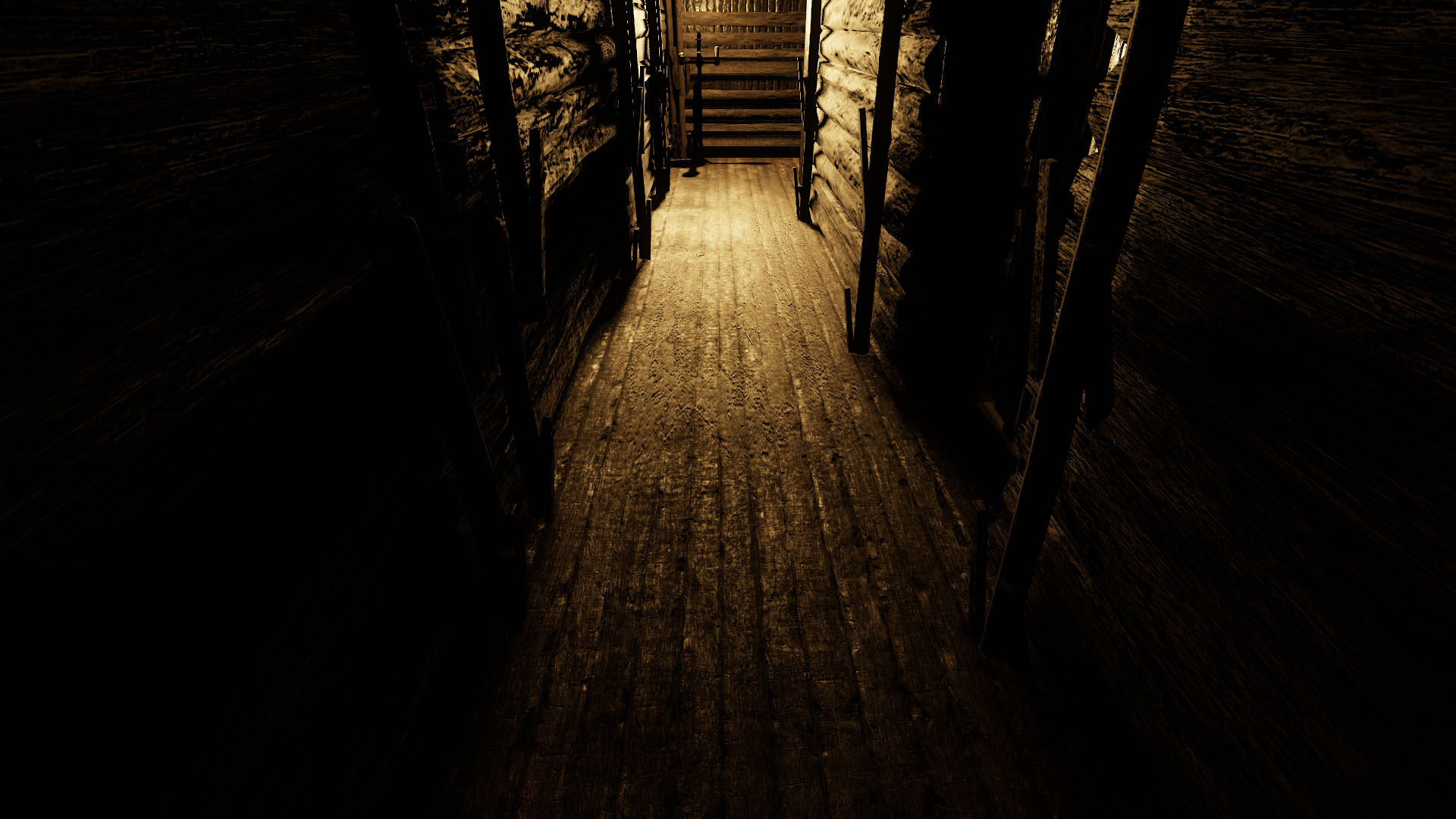 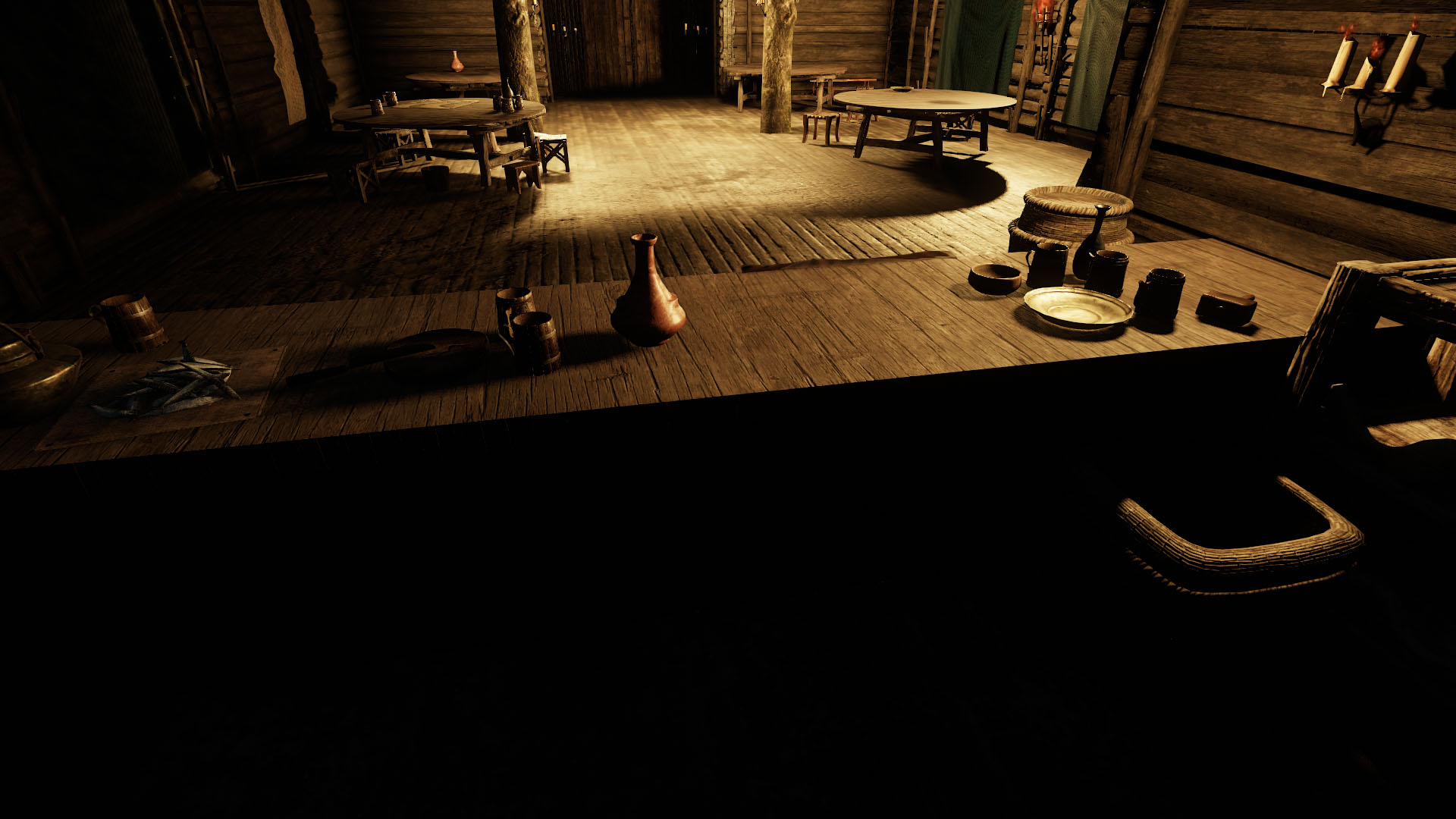 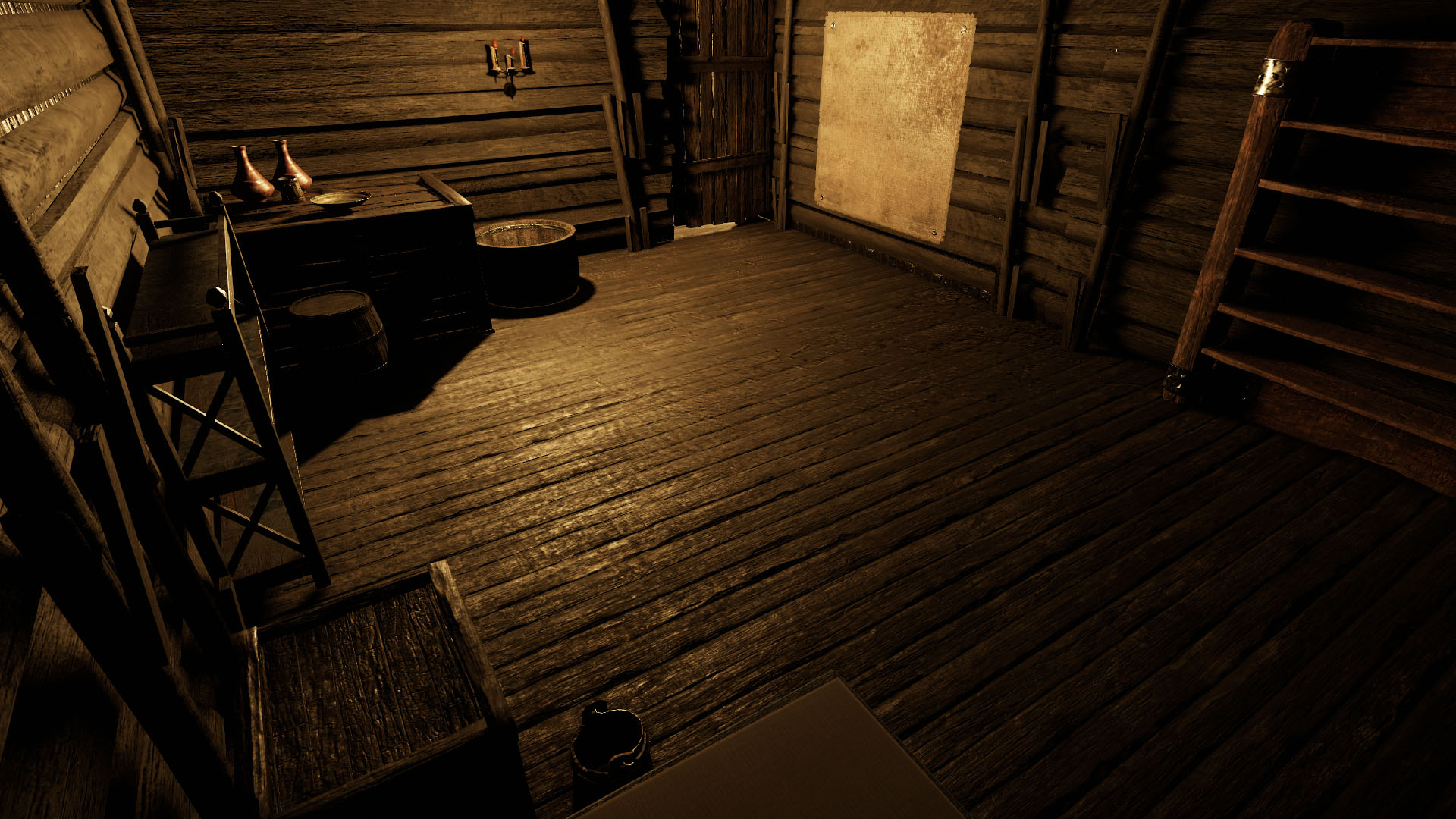 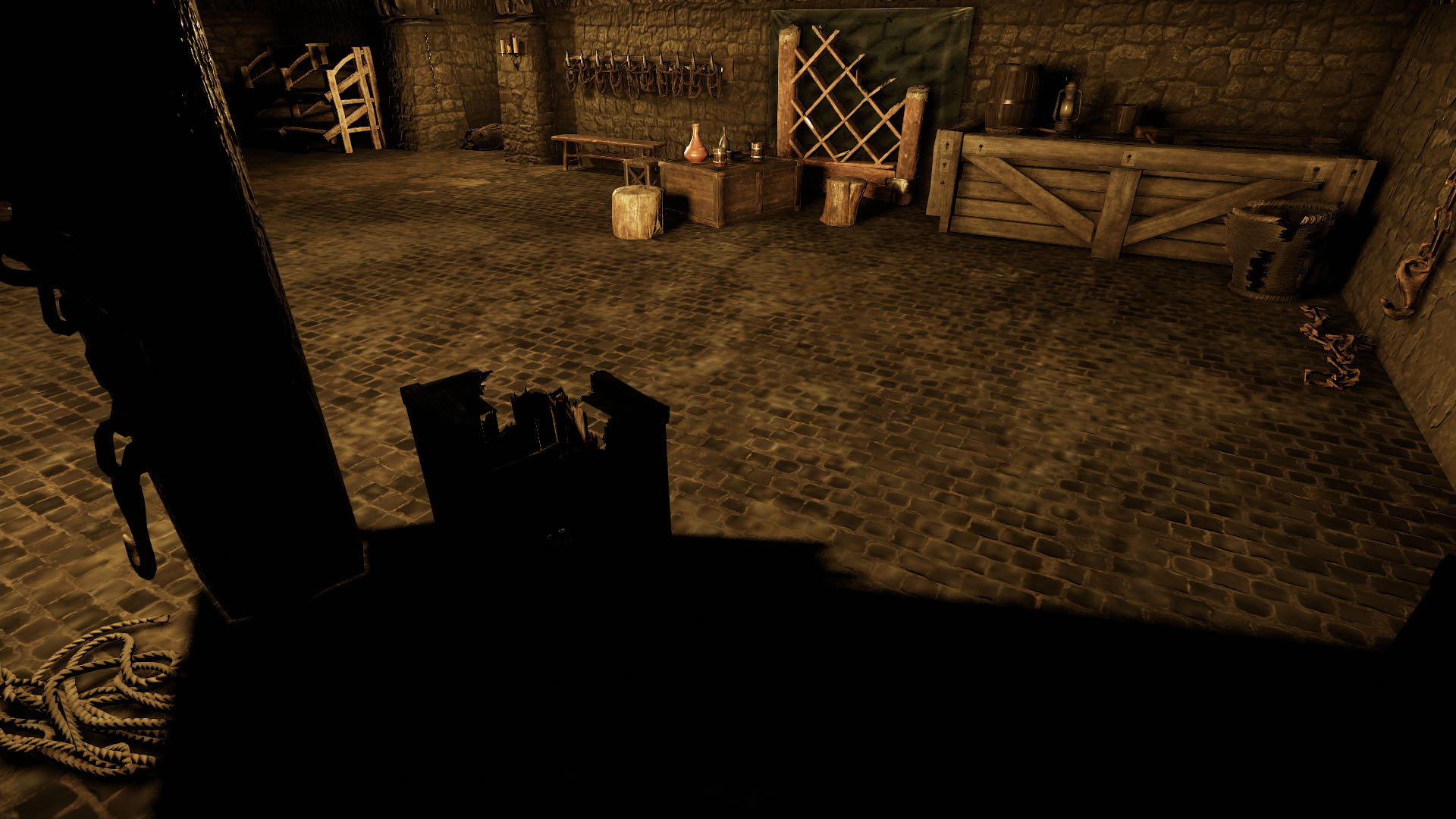 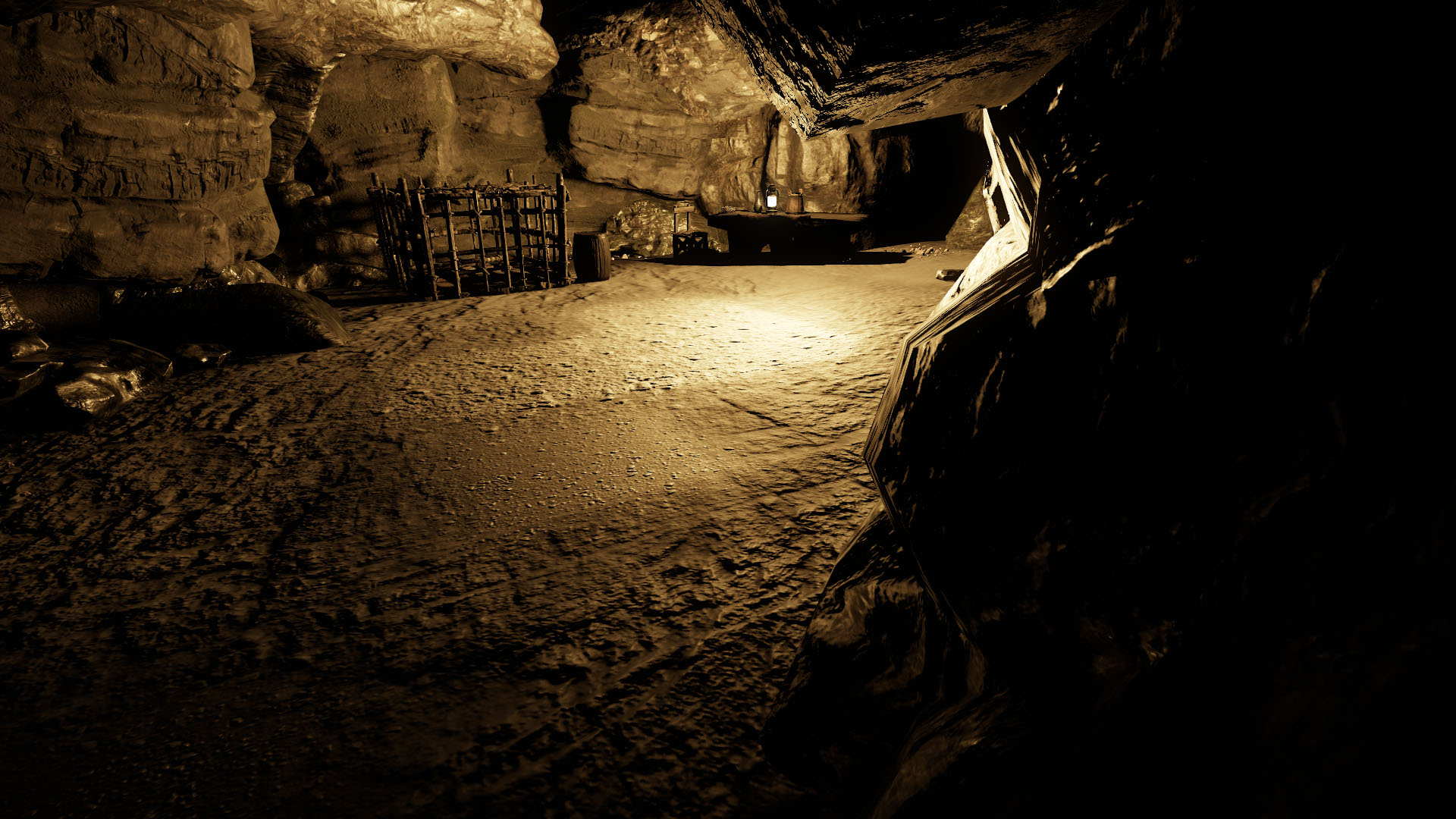 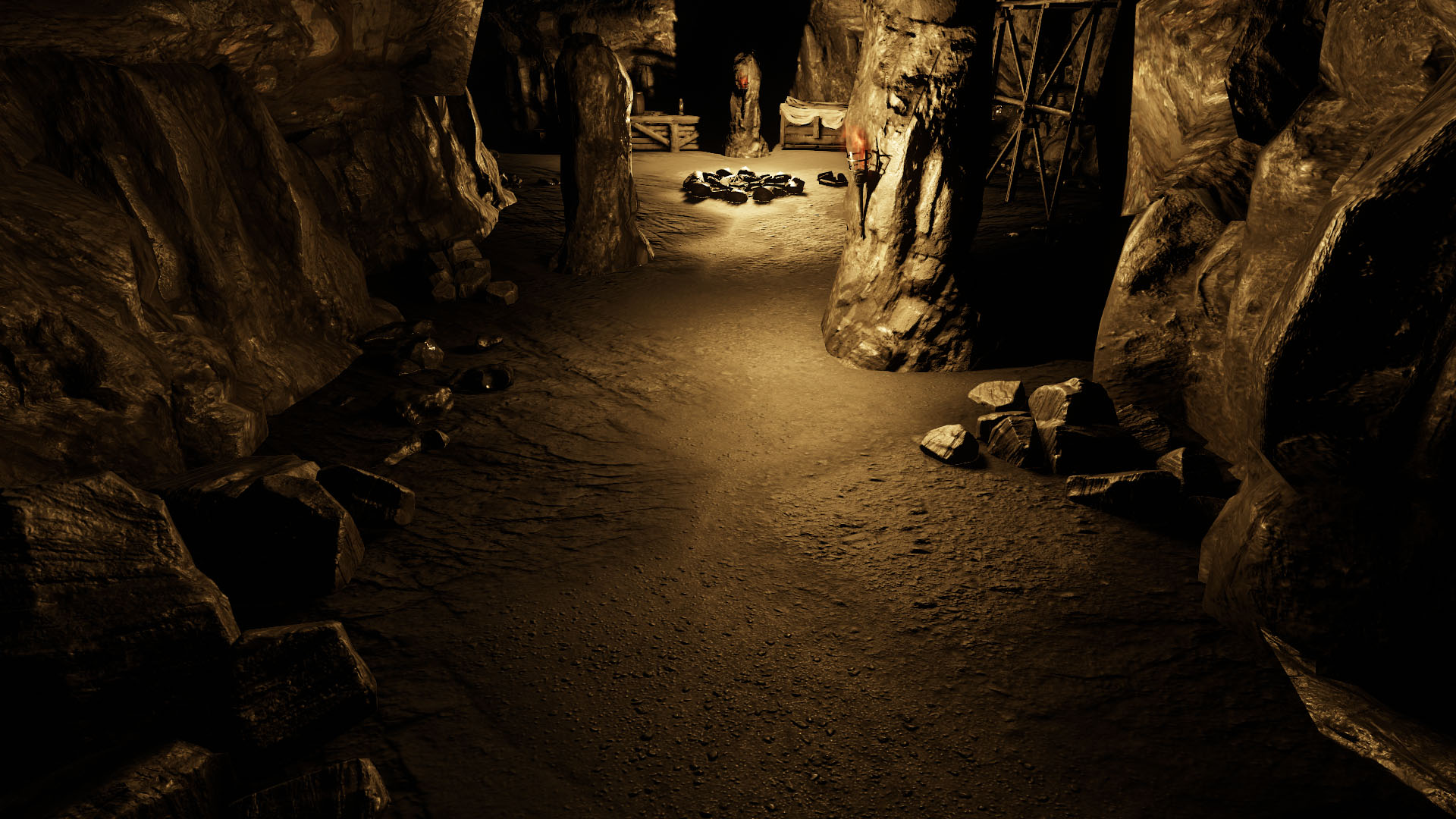 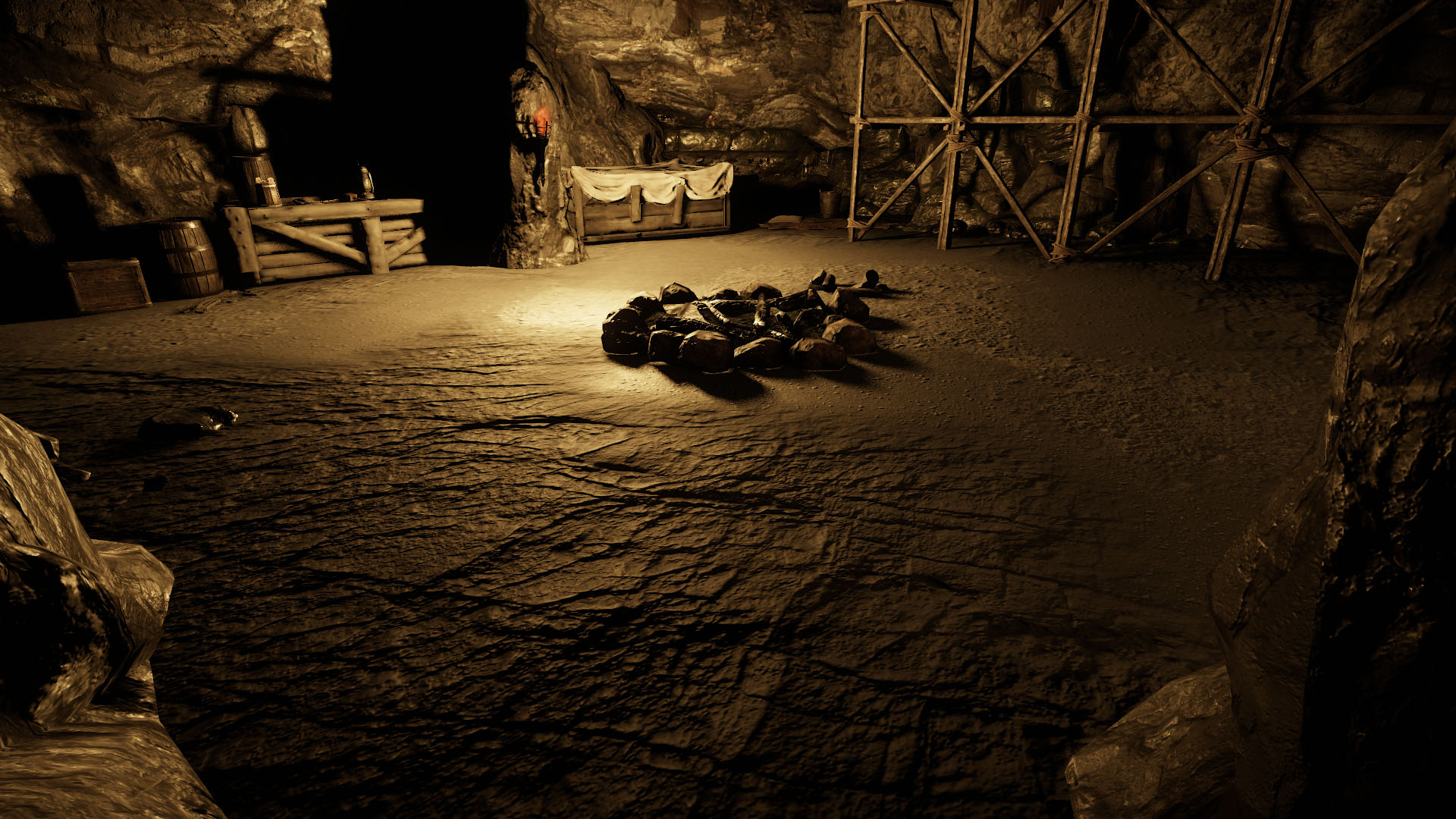 I constructed the foundation of the level using the Cryengine Level Design tool matching the scale with the original concept. Following this I populated the environment using a combination of purchased assets and my own to establish a dark and sinister mise en scène. The original concept was not originally intended to be transferred onto a 3D engine, as its purpose was to provide players with a visual aid in combat and travel. As a result the concept lacked sufficient realistic decoration and embellishment which ultimately made the environment feel somewhat contrived. So I spent more time working on making the environment feel natural and authentic.

Before concepting the environment, I began by creating an informal preproduction blueprint to answer all of the questions regarding details, such as the stonework, lighting, inventory, and décor. When considering the layout and form, I am led by gameplay and narrative rather than trying establish to realism. My aim was to make the environment look as though it had been converted into an inn recently, thus provoking inherent suspicion once the players conversed with the innkeeper. Additionally the inn’s windows were all boarded up to prevent the players from escaping; this was a gameplay choice to ensure that the new players joining the pre-existing campaign didn’t deviate from the introductory session.. 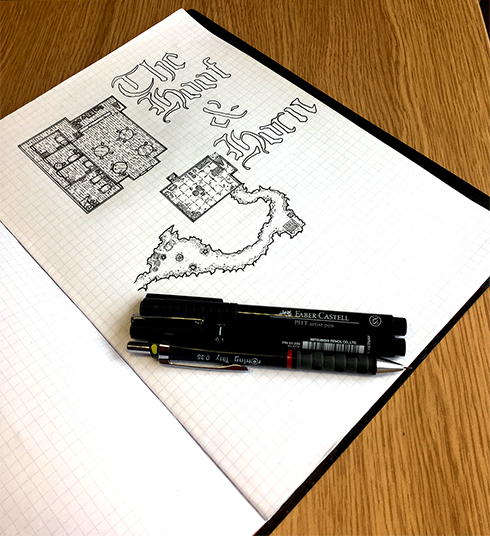 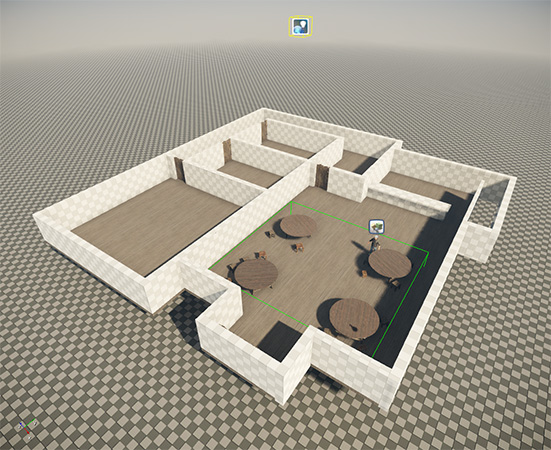 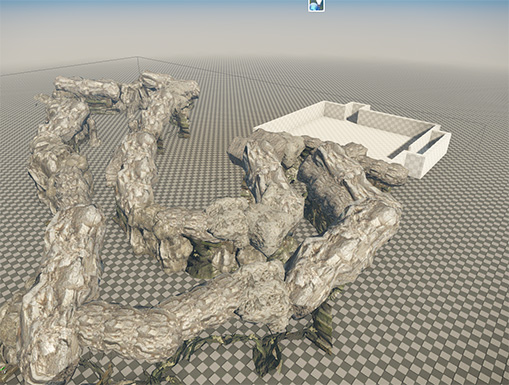 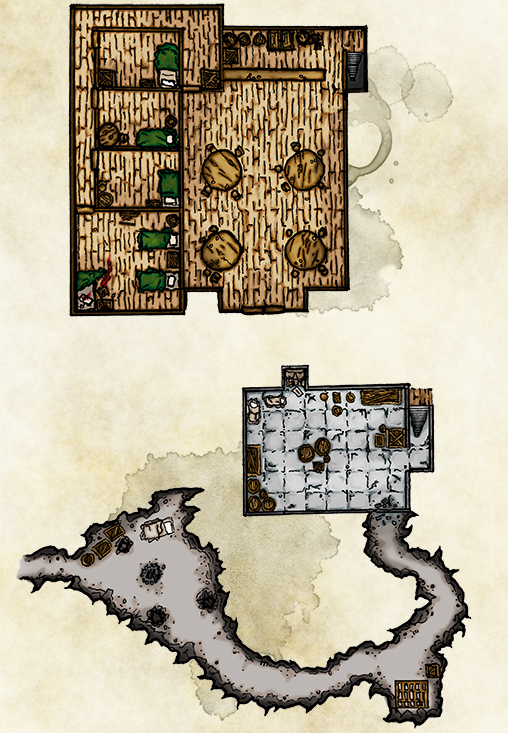 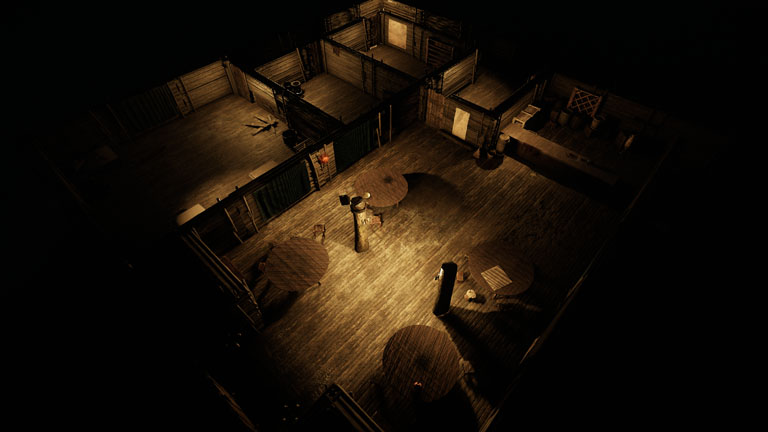 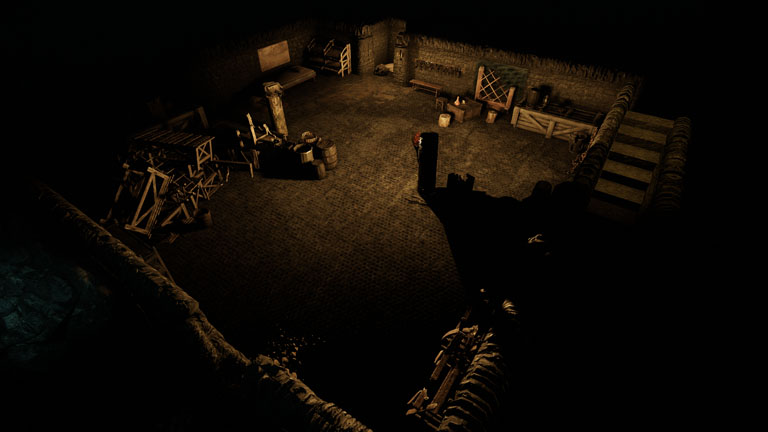 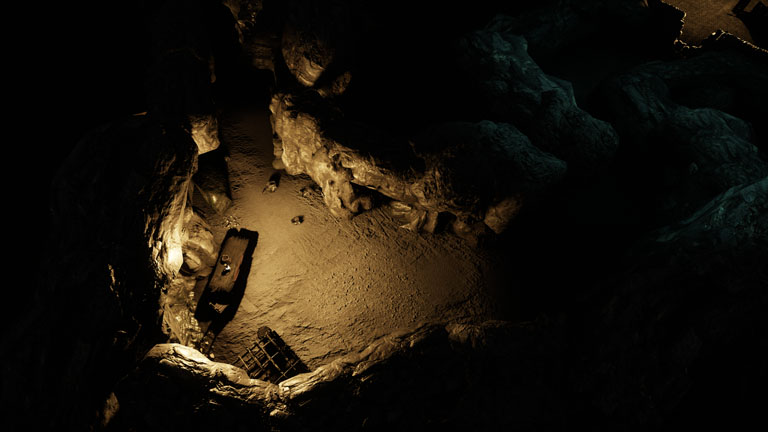 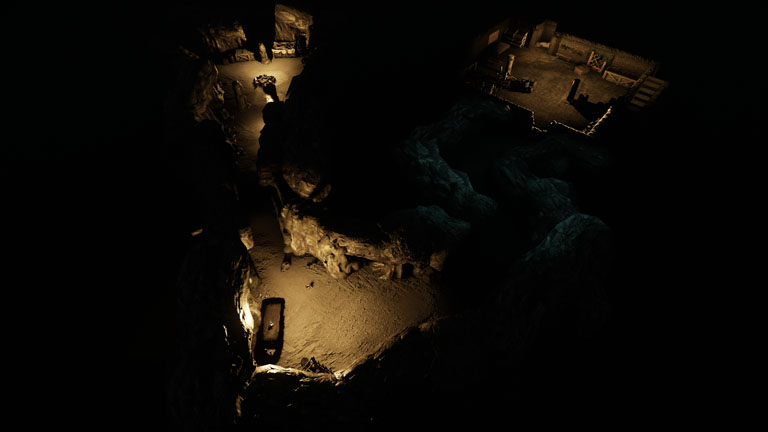 The original concept did not convey lighting, which presented its own challenges as I tried to realistically light the suspiciously windowless inn at night. During the play session, light played an important role for the players at the point of the mysterious midnight ambush, which aimed to represent their confusion through pathetic fallacy. Considering the remote location of the inn, it would be fair to assume the entire Inn would be illuminated by candle and torchlight. As a result most of the entire environment is illuminated by point lights with various effects to simulate the flicker and shimmer of fire.

Initially I wanted to develop this environment to potentially use as a visual aid during our D&D sessions, using a projector instead of a physical map. However with the inherent limitations of Cryengine and the time it takes to create a level made this task difficult to sustain for regular game sessions. Instead I created a simple Real-Time Strategy camera system to navigate the world and transition between floors. Using another game engine for another level project I would like to create this game master system. It would ultimately allow me to manage D&D sessions using a projector to display a level alongside a series of tools to control the RTS camera, character pieces, and fog of war.